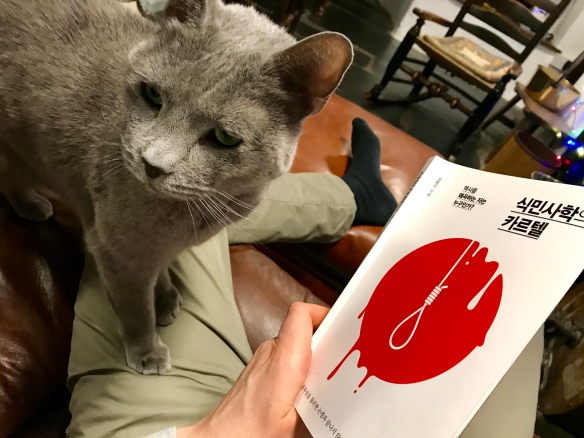 Yi Tŏk-il’s conspiracy theory of a pro-Japanese cartel premises their motivation as the promotion of an interpretation of early Korean history that would actively diminish its supposed territorial greatness and antiquity, as imagined by ancient empire advocates. As presented in his 2014 book “The colonial view of history within us”, the three principal components of Yi’s ‘colonial view of history’ are:

In Yi (2014) the complaint of Lelang is directed against scholar Song Hojŏng and the Early Korea Project’s 2014 Han Commanderies volume. In the case of the Chinese commanderies, in particular Lelang, both academic consensus and extensive archaeology have confirmed the location of Lelang as having been at P’yŏngyang.

Yi asserts the notion of Korean establishment historians promoting the Mimana Nihonfu hypothesis through active mischaracterization of Kim Hyŏn-gu’s lifetime scholarship on early Korea-Japan relations that had itself focused on criticism of the original colonial era Mimana hypothesis. In 2010, Kim authored a popular history book summarizing his research and arguments, titled “Is the Mimana Nihonfu theory a fiction?” (임나일본부설은 허구인가) and this is principally the work Yi (2014) mischaracterizes.

‘Mimana Nihonfu’ (Mimana Japan office) is a term uniquely attested in the 8th century Nihon shoki, but Mimana (K. Imna) alone, as well as Imna Kara (a variant of Kaya), are attested in various earlier sources including the Kwanggaet’o stele (414) and contemporary Chinese histories, as well as the later Samguk sagi. The colonial era interpretation of Mimana Nihonfu was to equate it to the Kaya states as an organ of archepelago Yamato control over the southern peninsular states of Kaya, Paekche and Silla. The finalized archetype of this interpretation is “A history of the rise and fall of Mimana” (1949 任那興亡史) written by Suematsu Yasukazu (末松保和 1904-1992).

In “The colonial view of history within us” Yi accuses Kim of actively promoting the Mimana Nihonfu hypothesis and explicitly denounces him as a ‘national traitor’ on a par to Yi Wan-yong (1858-1926), a figure known with the greatest infamy in Korea today as the minister who signed the 1910 treaty of annexation sealing Korea’s temporary fate as a colony to Japan. In October 2014, Kim Hyŏn-gu filed charges of defamation against Yi. Following an initial rejection the case went to trial and Yi was found guilty and sentenced to six months with a two year reprieve. However, following an appeal and a problematic second trial Yi was ultimately cleared in May 2017. With legal options exhausted and Yi seemingly vindicated, Kim’s “Colonial historiography cartel” (2017) seeks to lay out his case for the discerning public.

“Colonial historiography cartel” consists of two main components: a summary of the court cases with contextual information on Kim’s research and details of the arguments put forward, and a fierce counter attack against Yi Tŏk-il which, in a reversal of Yi’s own mantra, identifies Yi with a wider ‘cartel’ of actors promoting their conspiracy of colonial historiography.

Until the recent wave of critiques, when Korean scholars have previously sought to explain the fallacies and motivations of Taejonggyo-ist empire advocates, such as Yi, they have typically characterized them, semi-apologetically, as being overly zealous Korean nationalists. This caution has likely been calculated to avoid the risk of being denounced themselves as unpatriotic or pro-Japanese. However, rather than treating Yi as a misguided patriot, Kim (2017) seeks to turn the tables, not only defending the record of his own critical research on Mimana against Yi’s false accusations, but explicitly accusing Yi of having in his earlier works promoted core aspects of the Mimana hypothesis himself, and thus been guilty of the very crime with which he falsely accused Kim. “Colonial historiography cartel” seeks not only to clear Kim’s name in the public record, but to highlight Yi’s false credentials as a self-styled patriotic historian from which much of his public persona and political influence derives.

The timeline of the legal case is as follows with further details summarized after.

Based on the above three points, the Prosecutor’s office (서울서부지방검찰청) argued that even though, ‘on the surface’ Kim’s book indeed argues Paekche to have played the dominant role (in relations with Japan), Yi had expressed an opinion that Kim’s work could equally be interpreted as supporting the view that early Japan had ruled over the south of the peninsula.

Kim’s response is that the three points above are superficially based on the citations of Nihon shoki necessarily used within his work, rather than his own accompanying arguments.

The question of whether Yi was guilty of defaming Kim’s character hung on whether Yi’s characterization of Kim’s research was accurate. If so, then Yi’s accusations of Kim being a ‘pro-Japanese traitor’ could be accepted as Yi’s (patriotic) opinion. If not, then it would represent defamation based on false accusations. Consequently the case revolved around three accusations made in Yi (2014) against the content of Kim (2010), that:

Kim (2017) responds that, to the extent these arguments exist at all, they are based on the fact that his 2010 book cites the Nihon shoki, and that Yi was unable or unwilling to distinguish between the citations and Kim’s accompanying critical analysis.

In the court case, Kim’s summarized his research and interpretations as follows. P64-65

Citing multiple supporting passages from Kim (2010) the court rejected all three of Yi’s accusations as false. These are summarized in Kim (2017:66-74). In addition to the six month commuted sentence, Yi (2014) was banned from further publication (출판금지가처분).

Immediately following the guilty verdict and six month commuted sentence two articles appeared in newspapers in support of Yi. The first was part of a regular column in the Kyŏnggi ilbo newspaper by former 행자부장관 Hŏ Sŏnggwan (허성관) in which he criticizes the ROK prosecution (검찰) for, in his view, prosecuting those who would criticize ‘extreme right’ historians. The second was by former 참여정부 정책실장, Yi Chŏng-u (이정우), appearing in the Kyŏnghyang sinmun (2016.2.18 in Korean) under the title “Is Korea still a [Japanese] colony?” In response to these, the West Seoul court (서울서부지방법원) published the details of its verdict, which Kim (2017) reproduces pp77-78.

Yi appeals and the case goes to second trial. P79-94

Following an appeal by Yi and second trial, the first verdict was overturned. According to this second verdict, although Kim (2010) does not contain passages explicitly supporting Yi’s three accusations – as given in the first trial – the accusations themselves were not false statements (허위사실). P80 Two arguments given to support this verdict are as follows:

In response to the first point, Kim notes that, in having accepted Yi’s fallacious arguments, the court had failed to understand the core problem of Suematsu’s interpretation. Rather than being the question of whether Yamato had controlled the south of the peninsula – as advocated by Suematsu – they instead follow Yi in equating any mention of the Wae or Mimana operating on the peninsula to Suematsu, and by extension Japanese colonial interpretations.  P124 On the second point, Kim again highlights the inability or unwillingness of the court (?재판부) to distinguish between citations from Nihon shoki and Kim’s own critical analysis. p104

The concluding justification given in the verdict is that Yi’s interpretation of Kim (2010) being “no different to Suematsu’s Mimana Nihonfu hypothesis” represents Yi’s ‘subjective opinion’ of Kim’s book based on his own reading, and is therefore not defamatory. P119

Throughout “Colonial historiography cartel”, Kim describes himself as someone who has devoted the past thirty years of his career as a professional historian working to disprove the colonial era Mimana Nihonfu hypothesis represented in the work of Suematsu. Already an emeratus professor, for Kim to end his career with his name and research having been actively besmirched by Yi Tŏk-il is understandably a both personally tragic and depressing irony. However, Kim (2017) not only details the post-truth, Kafkaesque legal case, but mounts an active counter attack against Yi Tŏk-il, denouncing him, not merely as a misguided Korean nationalist, but as a “historically unparalleled agent of colonial historiography” who in previous works has himself “openly marked [on maps] the [Japanese] Wae as occupying the southwest of the Korean peninsula”. 사상 유례가 없는 식민사학의 앞잡이 노릇을 하고 있고 버젓이 왜(倭)를 한반도 지도 서남부에 표기해 놓고 있는 이덕일 (Kim 2017:157)

To support this accusation, Kim cites extensively from two of Yi’s earlier works, “Riddles of Korean history 1” (1999 – 우리 역사의 수수께끼 1 coauthored with Yi Hŭigŭn 이희근) and “700 year riddle of Koguryŏ” (2000 – 고구려 700년의 수수께끼). In both cases Yi argued that the Wae referred to as active on the Korean peninsula – as attested on the Kwanggaet’o Stele and in both Nihon shoki and Samguk sagi – represent an original Japanese ethnic polity which was located on the southwest of the peninsula before crossing to the Japanese isles and going on to establish Yamato. In particular, Yi accepts the description of the Wae as having controlled the south of the peninsula and been the dominant power over Paekche and Silla. Yi’s argument precludes the Japanese colonial interpretations of the Wae invading the south of the peninsula from Japan – as the explanation is that rather the Wae came from the peninsula – but still premises the presence of the Wae as having formerly occupied the peninsula. Kim argues that this is therefore closer to Japanese interpretations, in particular Egami’s horserider hypothesis, and in contrast to the Korean academic consensus which rejects the dominance of ethnic Wae over Paekche or Silla. P18-20 He further highlights Yi’s then acceptance of the Songshu (宋書 478) Wae treatise which records an elaborate title bestowed on the Wae king in 438 indicating lordship over the Korean polities of Paekche, Silla, Mimana/Imna, Chinhan and Mohan (Mahan). Kim again notes that, in contrast to Yi (1999), Korean academic consensus rejects this source as ahistorical. P22 According to Kim, Yi (1999) further takes the keyhole shaped tombs found around Naju in South Chŏlla province as evidence of the Japanese Wae presense. Yi (2000) repeats similar interpretations and includes a map of the peninsula, reproduced by Kim (2017:24) in which Wae is marked as a distinct polity south of Paekche.

Ironically these earlier interpretations by Yi are more reasonable than Kim is willing to allow. However, the valid argument made by Kim, is that according to Yi’s recent ‘colonial historiography’ polemic – as adopted by both the National Assembly special committee leading to termination of the digital East Asian atlas project, and in the false characterization of Kim as a pro-Japanese historian – by accepting the Nihon shoki and other records without qualification and consequently reasoning the Wae to have been a dominant peninsular force over Paekche and Silla, Yi’s earlier interpretations, by his own current standard, are closer to the premises of colonial era Japanese historiography than Kim (2010). To highlight this, Kim presents in table format a comparison of Yi (1999 and 2000) to Kim (2010) subdivided into five topics. (Kim 2017:46-49)

The details of this table which contains direct quotes from the works in question is summarized below.

On which polity subjugated the Seven Kaya states:

On which polity led the Wae forces as recorded on the Kwanggaet’o Stele:

On the relationship between Wae, Paekche and Silla:

On interpretation of the Songshu Wae treatise:

In the two final chapters, Kim (2017) details further individuals and organizations either directly associated with Yi Tŏk-il, or sympathetic to his conspiracy narrative.

These works argue Yamato Japan to have been founded by Paekche immigrés. They adopt the revisionist hypothesis of North Korean historian Kim Sŏk-hyŏng, according to which Nihon shoki references to Mimana and Three Kingdoms’ era Korean polities refer to Korean colonies located in Japan.]

Kim (2017:148) highlights the case of To Chonghwan’s statements made in 2017.6.6 as candidate to become the current minister of culture wherein he claimed that Japanese still equate the Mimana Nihonfu to Kaya, and that current Korean research on Kaya is being funded by Japan.

Korean ‘internet cafe’ whose name evokes the ‘righteous army’ term used to refer to the peoples resistance against the 1592 Hideyoshi invasion of Korea, and subsequently to resistance fighters based in Manchuria during the Japanese colonial period. (Kim 2017:156)